As part of the Penn-Lincoln Parkway project in the 1950s, this expressway helped Pittsburgh east-west travel and provide a connection between the airport and downtown.  Construction began in 1951 and in 1954 the section from the US 22/US 30 to Montour Run Road interchange opened to traffic.  The rest of the highway was then upgraded to a four-lane, divided highway.  The new expressway replaced Cliff Mine and Coraopolis Heights Road and Beaver Grade Road as the main route to the old Greater Pittsburgh International Airport.

The expressway saw reconstruction during the late 1970s and early 1980s as part of PennDOT's plan to rebuild the Penn-Lincoln Parkway from the airport to Monroeville.  Between 1979 and 1980, the former White Swan Park Interchange was completely rebuilt at a cost of $2 million.  The interchange was later removed in 1992.  In 1981, the expressway was rebuilt from the White Swan Park Interchange to the US 22/US 30 interchange.  The final cost of the construction was $5.8 million for the 2.4 mile section.

The expressway-standards were extended on the parkway in 1991 when the Thorn Run Interchange was completed in August 1991.  The interchange helped to alleviate one of Greater Pittsburgh's biggest bottlenecks.  It allowed traffic from the lower part of Moon Township traveling east to downtown to get onto the Parkway without having to travel west toward the former airport and having to make a U-turn.  Westbound traffic from the Air Force base that had to travel seven miles to the east to turn around at the Montour Run Interchange now had direct access.  Funding came from an unusual place for the interchange:  the private sector.  The Moon Transportation Authority devised a tax diversion plan to gain the funds to help finance the construction. 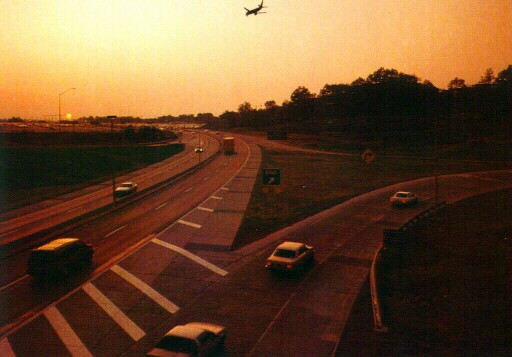 The next change to take place on the expressway happened in 1992.  It was in that year that the Southern Expressway opened to traffic as a route to the newly opened Midfield Terminal of Pittsburgh International Airport.  With the new expressway came a new interchange, or rather, a new configuration of an existing interchange.  The White Swan Park Interchange became the connection between the Airport Parkway and the Southern Expressway.  The amusement park by the same name was purchased by the Commonwealth and demolished to make way for the connection.  With the new highway, the PA 60 designation was moved onto it and the Airport Parkway was designated Business PA 60.

On October 17, 2005, US Senator Rick Santorum and US Representative Melissa Hart made an announcement at Pittsburgh International Airport that has been years in coming.  The Interstate 376 designation would be extended and signed on this expressway, replacing the PA 60 designation which was truncated at the US 22/US 30 interchange.  Improvements to the associated expressways and the designation change were included in the "Safe, Accountable, Flexible, Efficient Transportation Equity Act: A Legacy for Users" highway reauthorization bill passed two months earlier.  Cost for the extension was estimated at $80 million to bring the expressways to Interstate Standards, but doesn't have to be completed for 25 years and was certainly not by the target date of New Year's Day 2009.

Due to construction of the US Airways flight operations center and development along Cherrington Parkway, the Ewing Road interchange needed an upgrade to facilitate the increased traffic.  The first phase was installing new traffic signals and expansion of the eastern side of the interchange.  A roundabout, the first to be built in Allegheny County in years, was selected as the remedy for the western side of the interchange.  On June 27, 2011 at 11 AM, the eastbound on-/off- ramps closed for construction and reopened October 31 when the $950,000 project was completed.