Conceived in the 1963 Pittsburgh transportation plan, this expressway was built to connect the downtown area to the suburban areas to the west and northwest of the city.  Construction began in 1965 from the West Middlesex interchange to the PA 18 interchange.  The following year construction commenced on the Vanport Bridge over the Ohio River which opened in 1967. 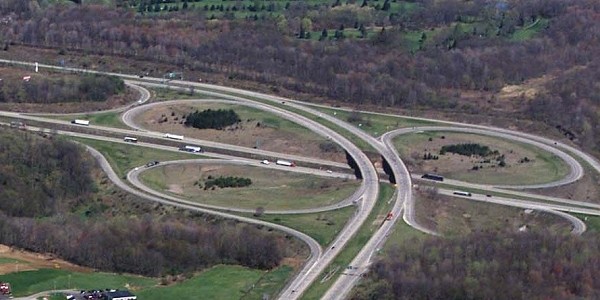 Aerial picture of the "folded" cloverleaf at Interstate 80.  (PennDOT)

The "missing-link" of the Beaver Valley Expressway would become a hot topic during the 1980s.  In August of 1981, State Representative George F. Pott of Gibsonia sponsored a bill that would provide $540 million dollars to build not only this expressway, but also  an expressway from Warrendale to Interstate 70 at Charleroi that would be the equivalent of an Interstate 279 and Mon-Fayette Expressway combination.  His bill did not pass in the legislature, and so the project sat on the shelf.  Even if it would be built, no one knew who would do the job:  PennDOT or the PTC.  It would not be until the passage of Act 61 in September 1985 that action would be taken to see the completion of then PA 60.  The new $807 bond helped to get several projects started or re-started as was the case with the Beaver Valley Expressway.

The first section to open, from US 422 to PA 108 which included the Mahoning River Bridge, opened on November 8, 1991.  The 1,700-foot-long span surpasses the Beaver River Bridge on the Turnpike's main line as is the longest in the system.

The rest of the highway opened on November 20, 1992 with the total cost coming to $243 million.  Due to aircraft trouble, Governor Casey could not make the ceremony, but addressed the crowd via a cellular phone.  Senator James E. Ross, for whom the highway is named, spoke of the optimism that he had for the economic development that would be attracted.  He then proceeded to cut the ribbon to open the expressway.

Another new section of PA 60 opened to traffic in September of that same year:  the Southern Expressway.  With the opening came a change in designation for the section of the expressway from the Greater Pittsburgh International Airport to the interchange with the Southern Expressway.  The former route of PA 60 received the Business PA 60 designation.

Pennsylvania is renown for our construction zones, but on October 11, 2001, one became a scene of horror.  A box truck driven by William James McClelland, of North Strabane Township, Washington County, went out of control in a work zone near the PA 68 interchange and killed five workers.  The Heavy Construction Carpenters Union, which four of the victims were members of, began a fund for the workers' families.  Dick Corporation, who employed the workers, continued to pay their salaries.  The Western Pennsylvania District Council of Carpenters collected more than $42,000 for the eight children of the workers, with the Eastern Regional Carpenters Council pledging $10,000.  Not as much as those pledges, but James Lucot, Jr. of Cranberry promised $100.  He was the first paramedic to arrive at the accident scene.

Plans are still being discussed on building several interchanges near the Pittsburgh International Airport property.  First is the completion of the Flaugherty Run Road interchange.  There are several missing connections and some proposed ramps have even gotten as far as preliminary grading.  The second is construction of an interchange to serve the cargo terminals at the northern end of the airport property which started in 2001.  Construction on the $42 million interchange was completed in 2003.

On November 20, 2003, when most were concerned about rising waters, it was barges that were the concern of drivers on the Beaver Valley Expressway.  The rain that caused flooding down the Ohio River and caused the Parkway East and 10th Street Bypass to be closed, caused 20 barges to break away.  The Vanport Bridge, along with three others nearby were closed.  Inspection crews found no serious damage on any.

On October 17, 2005, US Senator Rick Santorum and US Representative Melissa Hart made an announcement at Pittsburgh International Airport that has been years in coming.  The Interstate 376 designation would be extended and signed on this expressway, replacing the PA 60 designation which was truncated at the US 22/US 30 interchange.  Improvements to the associated expressways and the designation change were included in the "Safe, Accountable, Flexible, Efficient Transportation Equity Act: A Legacy for Users" highway reauthorization bill passed two months earlier.  Cost for the extension was estimated at $80 million to bring the expressways to Interstate Standards, but doesn't have to be completed for 25 years and was certainly not by the target date of New Year's Day 2009.