One of the first suburbs of Pittsburgh, thanks to the construction of the Liberty Tunnel, the South Hills grew by leaps and bounds.  The problem was as the population grew, so did the number of vehicles squeezing onto Saw Mill Run Boulevard.  The highway received its name on December 15, 1929, when it consisted of a 20-foot-wide stretch of concrete between Overbrook and the Liberty Tunnel. 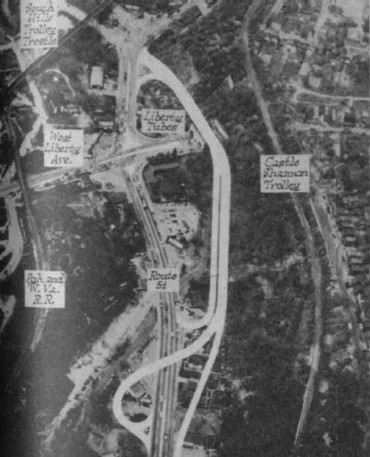 A proposal from 1957 for eliminating the congestion
at the southern portal of the Liberty Tunnel.
(Brookline Connection)

The Pennsylvania Department of Highways began to study construction of an expressway alignment along the same right-of-way as the boulevard in 1958 and was incorporated into the 1963 Transportation Plan.

In 1964, the City of Pittsburgh announced plans to take away the reputation of Saw Mill Run Boulevard as the worst bottlenecks in Western Pennsylvania.  An immediate "crash program" to correct faults in the highway over the next two years would be implemented.  A longer range plan was also developed that would occur simultaneously with the first plan, that would involve the use of new "relief" routes and an expressway.  The plans were presented to the Department of Highways with a plea for "immediate action."  The city also pledged its full co-operation of resources for the project.  On January 21, 1963, John T. Mauro, the City of Pittsburgh Urban Renewal Coordinator, announced the details of the short-range plan as follows:

With the completion of these improvements, work would begin on the following:

Mauro stated the long term solution for the corridor be an expressway and gave several suggestions.  He urged the state highways department should pursue its study of a new relief route.  It would start near Overbrook and follow Beck's Run Road to the Monongahela River and the Oakland Crosstown Freeway.  Within three years the state should begin design of a new expressway through the Saw Mill Run Valley from PA 88 to the Liberty Tunnel, with interchanges built at the northern and southern portals.  Construction should start within five to six years.  Improvements are needed on highways between the Glenwood Bridge and Lebanon Church Road, to provide an alternate route for traffic from Pleasant Hills into Pittsburgh.  His suggestions also reached Port Authority Transit, whom he said needed to develop rapid transit on the Pittsburgh Railways Company right-of-way along Saw Mill Run.  Park and Ride lots would be constructed along PA 88 in Castle Shannon to intercept motorists heading into downtown.  Not to forget the Department of Highways, he said of them that studies should continue on PA 88 from the Washington County line to Overbrook.

The Department of Highways released the details of the new expressway on October 3, 1968.  The project called for construction of 5.5 miles of limited-access highway along Saw Mill Run Creek from Overbrook to the West End.  The expressway would have been six to eight lanes in width, and a half-mile-long "hot dog" shaped interchange at the southern portal of the Liberty Tunnel.  Plans called for encasing about 90% the creek in a concrete culvert between PA 88 and the Fort Pitt Tunnel.  Also provisions were made for a two-lane PATway, now called busways, to run in the median.  Interchanges would have built at the following locations:

The cost of the new expressway would have been $145 million and would have eliminated practically every business along Saw Mill Run Boulevard.

On October 12, 1969, Uncle Sam joined in the battle against gridlock.  The US Army agreed to let the state take their reserve center at 950 Saw Mill Run Boulevard for the sake of the "hot dog" interchange at the southern end of the Liberty Tunnel.  The oval of concrete with a circumference of a mile, would serve as a router of sorts.  It would accept traffic from eight streets such as Pioneer Avenue, and funnel it into the tunnel, onto any of the connecting streets, or onto Saw Mill Run.  A vehicle exiting the tunnel would go under the expressway and onto West Liberty Avenue, or enter the ramp system, onto Saw Mill Run.  Traffic signals would be installed in the system, but only used during peak hours.  The loop highway would be three lanes and in some areas such as between Crane Avenue and Pioneer Avenue it would be five lanes.  However, it would be mostly four lanes.  Hal Aitken of J. E. Greiner Company, Inc., the consultant on the project, said it would amount to $22 million.  Forty percent of the cost would be enclosing the creek ($7 million), and building a new bridge for Skybus across the proposed expressway ($1 million).

In 1970, officials with the Southwestern Pennsylvania Regional Planning Commission began to change their minds on building an expressway in the corridor.  By March 1973, all interest was lost in the expressway, and the state killed the project.