On July 13, 1994, a senate panel gave $30 million to the project which was a dramatic increase from the $10 million the House of Representatives authorized.  In June 1994, backers of the busway were shocked when they learned only $10 of $40 million suggested would be appropriated for the fiscal year beginning on October 1.  It was also a blow local officials who were trying to speed completion before PennDOT's planned rehabilitation of the Fort Pitt Bridge and Tunnel.  Senator Arlen Specter, who served on the appropriations transportation subcommittee which recommended the $30 million figure, said, "With the new airport open and the Fort Pitt Bridge about to undergo reconstruction for several years, traffic between the airport and Downtown Pittsburgh is about to become a real nightmare."  Even with this issue, ground was broken only a few months later on October 27, 1994.

The most challenging aspect of the project was the refurbishing of the 148-year-old Barry Street Tunnel, a former rail tunnel, that carry the buses between Sheraden and Ingram. The restoration began in December 1995 and lasted until 1997 at a cost of $33.3 million. Some of the work that took place was widening the tunnel to accommodate two lanes of traffic, excavating the existing brick lining, and installing tunnel lighting, ventilation, fire protection, and drainage.

Construction of busway ramps connecting to the Parkway West near Carnegie and Rosslyn Farms began in mid-1998 and the Corliss Flyover was started in March 1999.  The flyover, which marks the eastern terminus and connects the busway to West Carson Street, was a compromise from the original plan.  The busway was to have begun at the Monongahela River Bridge's southern end at Station Square then parallel the Norfolk Southern rail lines to Corliss. Construction of the mainline was completed in September 2000 when the Parkway West interchange and Corliss Flyover were completed.

The busway was officially opened on September 8, 2000, and with it a new bus route:  100 West Busway.  Buses using it can shave 26 minutes off the same trip via the Penn-Lincoln Parkway, by speeding the nearly 40,000 daily riders to their destinations.  While no personal vehicles can use this highway, it will be open to emergency vehicles.

The busway has been bestowed with several awards regarding its benefits to the community, aesthetic qualities, innovative design, and construction features.  The following is a list of those accolades:

Originally the Wabash Tunnel was to have been incorporated into the busway project.  The work to rehabilitate the tunnel began in 1996 when the first of two projects began.  A $3.1 million contract went to Kiewit Construction of Baltimore, Maryland for demolition of the Skybus track and installation of new drainage and pavement inside the tunnel.  The next project began in 1998, when Mosites Construction Company was awarded a $37.1 million contract to build a new portal building on the western end of the tunnel and update the portal building on the side of Mount Washington that faces downtown as well as ventilation, electrical, and communication lines.  The tunnel opened at 6 AM on December 27, 2004 with one-lane of traffic inbound in the morning and outbound in the afternoon.  Originally there were to be two lanes operating simultaneously, but Port Authority engineers determined the tunnel's lanes would only be 11-feet-wide.  However, vehicles will be allowed to pass ones broken down using the closed lane.  The direction of travel will be regulated by lights, gates, signals, and variable message signs such as seen on I-279 and I-579. 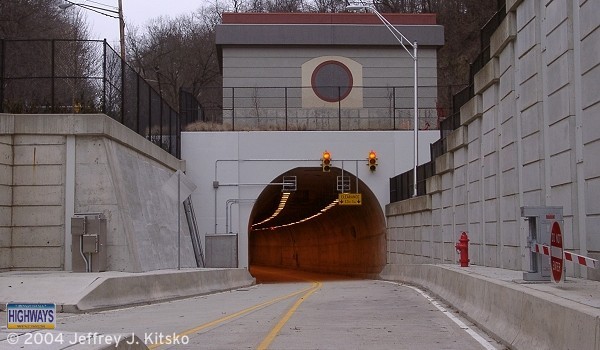 Southern portal of the Wabash Tunnel off Woodruff Street.

The tunnel is equipped with ventilation fans, safety features such as carbon monoxide and fire detection systems, fire extinguishers, emergency telephones, and closed circuit cameras to monitor traffic.  Port Authority will be stationed in the portal above the portal facing downtown 16 hours-a-day to monitor conditions and respond to problems that may arise.

"The Wabash HOV will provide another route to and from the city and help alleviate congestion on the Fort Pitt and Liberty Bridges," said Port Authority Chief Executive Officer Paul Skoutelas.  No ribbon cutting ceremony took place due to the economic state of the Port Authority.  "No funds, no ribbons," spokeswoman Judi McNeil said of the low-key opening.  The authority was required to complete and open the tunnel by December 31 as part of the West Busway in order to adhere to the $321.6 million "full funding agreement" with the Federal Transit Administration which paid 80% of the cost.  If they had not met the deadline, the Port Authority would have faced possible penalties and disqualification for future grants.  The ramp from West Carson Street to the tunnel cost $10.9 million alone.

The tunnel was originally bored at the turn of the century to carry the Wabash-Pittsburg Terminal Railroad through Mount Washington to its terminal in downtown Pittsburgh via a bridge across the Monongahela River, whose piers still stand.  It opened in 1903 at a length of 3,342 feet.  After the railroad went bankrupt, a landslide that blocked the city side portal and damaged the approach in 1925, and fires on March 6 and 22 of 1946 that destroyed the downtown terminal and bridge, freight service through the tunnel stopped.  Passenger rail service through the tunnel stopped on October 31, 1931. 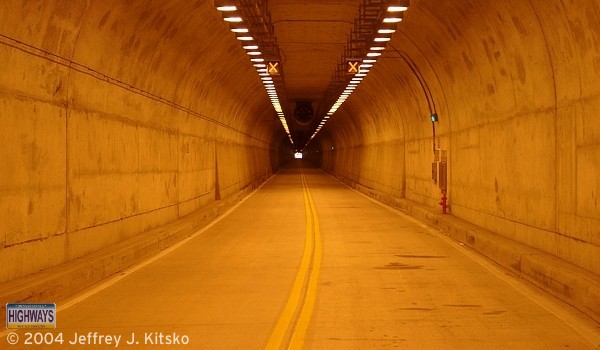 Inside the tunnel looking towards downtown.  Even though it is striped for two lanes, only
one is in use at any one time and the other closed off in case of breakdowns.

Ideas on how to use the tunnel came and went through the years.  Allegheny County purchased it in 1931 for $3 million with plans to use it to relieve congestion at the Liberty Tunnel.  A $5,000 feasibility study was conducted in 1933 to determine if the tunnel would be suitable for vehicles.  The Port Authority of Allegheny County then purchased the tunnel from the county for its Skybus system, which would have been an automated system similar to a monorail.  In 1971, a $6 million project to upgrade the tunnel for the Skybus system began, but eventually the project was cancelled.

One part of the original busway plan that hasn't seen, and may never see construction, is a new bridge across the Monongahela River from downtown to Station Square.  Utilizing the railroad bridge piers which still stand at Stanwix Street and the Gateway Clipper docks, the bridge would come into downtown above the current street grid.  Former Mayor Sophie Masloff was in favor of having the bridge enter on the current street grid which would mean the eastbound lanes of the Parkway East would have to be lowered.  Talk in the late 1990s was so consistent that even Unique Media Maps' 1995 Pittsburgh edition indicated the bridge as being opened by 1997.  Now that the Fort Pitt Bridge/Tunnel rehabilitation is complete and that elevated section was rebuilt, it is highly unlikely it will be torn down to be lowered.  So alternate plans were drawn up to build ramps to East Carson Street and have traffic utilize the Smithfield Street Bridge to cross the river.  However, the Port Authority is still talking of spanning the river with a bridge. 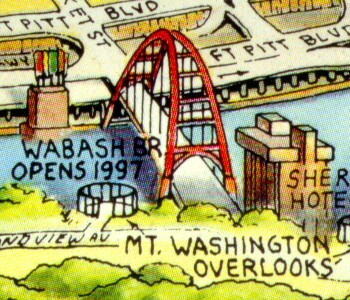 Since passing the one-year mark in December 2005, usage of the new tunnel is not as high as wanted by the Port Authority.  Based on current figures, it costs taxpayers $12 per trip for each vehicle that passes through.  They pay private company Bruce & Merrilees to provide a supervisor and workers who change gates and signs to control the direction of traffic, monitor video cameras and carbon monoxide detection systems, respond to accidents, clear snow, and handle breakdowns.  The cost is covered by the agency's budget which is funded 80% by the Federal Transit Administration and 16 2/3% by PennDOT which ends on December 31.  The tunnel has been forecasted to attract 4,500 vehicles a day by 2015 which is based on other factors such as extending the southern end to Banksville Road.

The Port Authority receives $100,000 a year from Parking Solutions Inc. for leasing the 160-space parking lot at the northern end of the tunnel.  The agency and PennDOT were both hesitant about making the tunnel into an HOV facility, but local officials insisted it had promise.  In addition, the FTA required the Port Authority to finish and use the tunnel as part of a "full-funding agreement" for the West Busway.  If the tunnel was not opened, the FTA could have required payment for the 80% of the Federal funding for the busway.  Henry Nutbrown, the authority's manager of engineering and construction, said, "This facility was not supposed to function as it does today.  It's not what we hoped for, unfortunately, it's a marginal project, the way things went."

Due to the low usage, Pittsburgh City Councilman Jim Motznik has introduced a resolution in council chambers for the Port Authority to conduct a traffic study and examine the possibility of dropping the HOV restrictions.  His rationale is that it would ease problems at such traffic choke points as the Liberty Tunnels and Fort Pitt Tunnel.  The Port Authority has offered the Wabash HOV Facility to city and state officials as an exit point for traffic in case of emergencies at the Liberty or Fort Pitt Tunnels.

The tunnel closed on April 15, 2013 at 6 AM, but only temporarily for some minor work.  In late October 2012, a tractor-trailer damaged the traffic control gates on the southern end of the tunnel, closing it for downtown bound traffic.  Two additional accidents and delays in obtaining replacement parts hindered efforts to repair and reopen the tunnel.  The traffic gate replacement project concluded at the end of May.

On February 24, 2017, the Port Authority announced that the HOV+2 restriction in the Wabash Tunnel would be lifted permanently.  The Federal Transit Administration granted the agency a temporary waiver in 2013 to lift the restriction to ease traffic during a PennDOT project on West Carson Street.  The waiver had been extended through December 31, 2017 and on January 6, 2018, it gave the Port Authority permission to eliminate it altogether.